Camagüey works for socialism and its sustainability, Díaz-Canel assures (+ Photos) 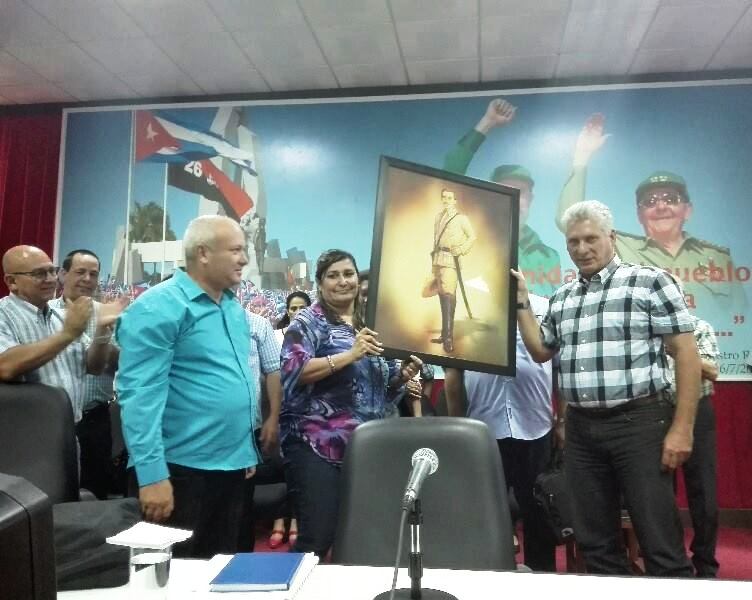 Camagüey, Oct 20. -At the end of the government visit that led the president of the Councils of State and Ministers of Cuba Miguel Díaz-Canel Bermúdez in Camagüey said that in the province they work in an intense way, with innovation, new ideas and thought that propitiate a satisfactory political environment and the people's recognition to what has been achieved.

In the summary meeting of his two-day stay in the territory, he stressed that the people from Camagüey are cultivated and polite, and he says that regardless of the limitations, they participate in everything that is done, they recognize and defend what is done, which contributes to maintain confidence in the improvement of socialism and its sustainability.

He valued that there is a diversity of options and that interesting and good taste projects are generated, which give rise to transformations while recovering paradigmatic places of local identity, as it happens with the Theme Park and the Railway Museum, besides the fairgrounds, both sites visited by the president.

The also a member of the Political Bureau of the Central Committee of the Communist Party of Cuba (PCC) commended the progress of the computerization program of the society  in Camagüey and stressed the importance of the products that are produced in the Center of Genetic Engineering and Biotechnology.

He oriented to provide a more rigorous follow-up to the investor processes, regarding which, Alejandro Gil, Minister of Economy and Planning, pointed out that the increase of exports and investments in the productive sector is a priority to substitute imports and allow financing to be paid with the yields they generate.

Gustavo Rodríguez Rollero, Minister of Agriculture, explained that the Territory can guarantee the necessary food for its inhabitants, even to supply to other areas, and valued as very positive the concept which is applied that each municipality is capable of self-supporting them.

Regarding this, Díaz Canel indicated the increase of irrigation machines in areas destined to the cultivation, according to the extension of the province and its high population. He said that "this is historically the country's livestock region", so he urged to apply here first the new technologies, experiences and development programs of the sector, in order to take advantage of the existing culture and infrastructure, and to enhance them even more.

The Minister of Construction, René Mesa Villafaña, informed the representative that up to date 48% of the houses affected by Hurricane Irma have been recovered. On the subject, the Cuban President commented the biggest dissatisfactions of the people from Camagüey are in housing, as he appreciated while talking to the people.

He said that from the production of construction materials in the 13 municipalities and the mini-industries in some Popular Councils more than four thousand homes can be lifted annually, for which it is necessary that the resources needed to exploit the maximum installed capacity reach the territory.

At another time in his speech, Miguel Díaz-Canel said that in the debate of the Draft Constitution of the Republic of Cuba is appreciated in Camagüey the contribution of people to enrich the text, in an environment of responsibility for what it implies for the future of the nation.

The government visit to the province took place, he said, in the context of the commemoration for the 150th anniversary of the beginning of the struggles for independence, in which this land was meaningful and it is impossible, he said, to be separated from that feeling and the admiration for Ignacio Agramonte and Loynaz, which is why he paid tribute this Friday in the Potrero de Jimaguayú, where he fell in combat on May 11th, 1873.

By the way, at the conclusion of the summary analysis, the member of the Central Committee of the PCC, its first secretary in Camagüey, and Isabel González Cárdenas, president of the Provincial Assembly of the Popular Power, gave Díaz-Canel a picture with the image of El Mayor.

The Cuban President held exchanges with the people of Camagüey, from whom he received signs of affection and support, and summoned them to continue working for the good of this province and the country. (Photos taken by the autor and Revolution Studies/ www.granma.cu)