American students and professors interested in getting closer to Cuban reality 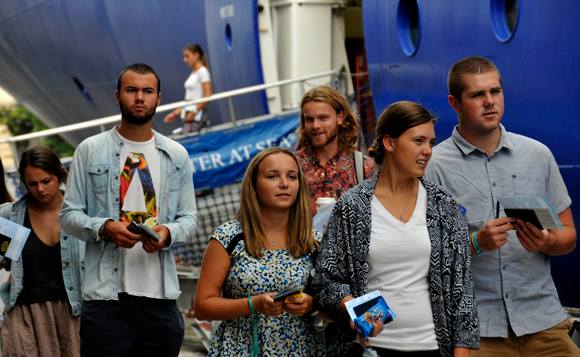 Washington, Nov 5. -Professors and students from three universities in the US state of Oregon showed their interest in learning more about Cuba, getting closer to their reality and developing academic initiatives with colleagues from the island.

This way it transcended in an exchange with the Cuban diplomat Miguel Fraga, who made a visit to that American territory.

The first Secretary of the Havana Embassy in Washington D.C. shared criteria on the relations between the two countries, and reiterated the willingness of the greater of the Antilles to have normal ties with the United States on the basis of mutual respect.

During presentations at the universities of Portland, Oregon and Oregon State, Fraga referred to the negative impact of the economic, commercial and financial blockade imposed by Washington on Cuba for more than 55 years.

He noted that the isolation of the American administration with this policy was evident as showed by the recent support of almost everyone in the United Nations to the island's claim to end the siege.

Three days ago, 189 countries supported in the General assembly of the multilateral body the Cuban resolution on the need to end the blockade, and only two countries, the United States and its ally Israel, opposed the text, while there were no abstentions.

On the other hand, Fraga participated in the annual convention of the United States National Lawyers Guild, a progressive organization that maintains long-standing links with Cuba and defends bilateral ties.

The diplomat also made a courtesy visit to Oregon's attorney general, Ellen Rosenblum, and among other topics they discussed the cooperation of the two nations for the implementation and enforcement of the law. (PL) (Photo: File)