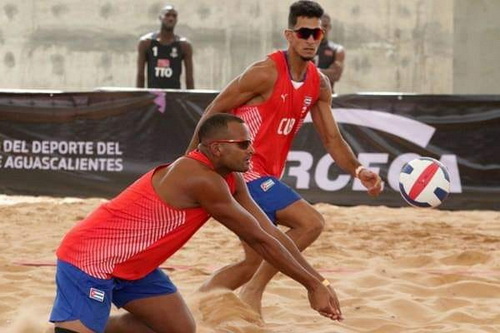 Havana, Cuba, May 2.- The Cuban duets of Leila Martinez-Maylen Delis and Sergio Gonzalez-Luis Enrique Reyes will seek this weekend to increase the medals amount won so far in the 2019 North, Central America and Caribbean (NORCECA) beach volleyball tour.

Both couples will compete in the third stop of the circuit to be held in Nicaragua, from May 2 to 5.

In the first and second stops of the season, based in Mexico and the Cayman Islands, respectively, the women´s side of Martinez-Delis earned two crowns, while the men´s pair won bronze and silver medals, in that order.

According to the contest's website, the winners of the tournament will be awarded 200 points, while the silver and bronze medalists will earn 180 and 160 units, respectively.

Gonzalez and Reyes will have a greater participation in the circuit, since they will also attend the stops in Varadero, Cuba, (May 9-13) and Baja California, Mexico (June 6-10), as well as the world championships (June 28 to July 7th), while the women´s pair will only participate in the NORCECA Cuban stop. (acn)