Guterres calls for more international support to The Bahamas 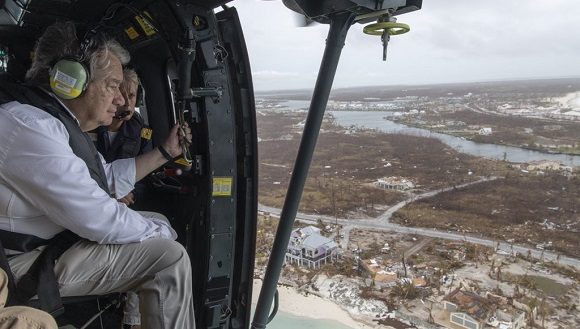 United Nations, Sep 16 - The UN Secretary General, António Guterres, has advocated on Saturday to investing in resilience and adaptation in the Caribbean, a region that already feels the effects of climate change, as hurricane Dorian shows.

Guterres continues his visit to the Bahamas on Saturday, where he arrived on Friday to express solidarity and support after the passage of that powerful climate event, his spokesman's office said.

The top representative of the United Nations met yesterday with the Bahamian Prime Minister, Hubert Minnis, and discussed ways in which the multilateral organization can provide emergency support.

According to the UN Secretary General in a press conference after the meeting, climate change is not a threat to the future; it is something that is happening now and with devastating effects.

Dorian caused huge damage in northern Bahamas, particularly in Abaco and Grand Bahamas islands where the toll is expected to exceed 3,000 dead. Media reports tell that complete communities were wiped out by the winds and the sea.

On Friday, the UN Secretary General visited evacuees from the Gran Bahama and Abaco Islands, and also met with humanitarian teams that carry out recovery efforts.

Recently, a new tropical storm has been formed, named Humberto, whose likely trajectory threatens the Bahamas.

According to forecasts, that system will move very close to the northwest of the Bahamas throughout Saturday.(PL)