The Angklung Orchestra of Camagüey: a Project of Melodies and Dreams

• Indonesia is the original country of the angklung and its melodies are almost unknown off its coasts, even when it has been used with other musical instruments.

Over the last two decades, the musical teaching in the province of Camagüey has educated thousands of youth. Located in the outskirts of the city, the Jose White Conservatory of Music, with 23 years, and walls built in the 19th century, it is impossible to say that the school ages.

Every day, professors and students get involved in a battle against the evolution of time, because the music and its great creators do not expire. But they are also open to new influences to enrich Cuba’s myriad of musical genres.

That is why, when they received a donation of angklungs , they didn’t hesitate a second to found an orchestra.

But the point is that they didn’t know how to play the instrument. However, only some months were enough for them to learn three Indonesian melodies and some Cuban tunes.

Today, the Angklung Orchestra of Camagüey has a repertoire of 12 musical compositions.

Made up by students of the conservatory, and conducted by Professor Eugenio Silva, this is the first orchestra of this kind in Cuba. The angklung is originated from Indonesia and its melodies are almost unknown out of this Asian country, even when it has been used by foreigners in the so-called ethnic music.

The project arouse from the cooperation between the Government of West Java and the People’s Power Provincial Assembly of Camaguey.

But the instruments came like “drugs without the medical order form”. They simply donated the instruments, but didn’t explain how to use them, we had to learn by ourselves, remembers Silva.

But the mood to always be experimenting in the Conservatory is higher than any other difficulty, so the members overcame all obstacles.

AN EVENING OF REHEARSAL…

When you visit the Jose White Conservatory of Music, you get the impression that the place is all crazy. You can listen to the interrupted key of a horn or the sound of the congas, and so, countless types of instruments, each one separately reach the senses.

From the end of the school, in a very small and almost hidden room, a “strange melody” comes out. It sounds different to our hears, which are used to the strings, drums and winds typical of our music.

In a small room, amid instruments, chairs and music stands; 30 students work hard to make music out of the angklung. And although at the first sight these “sticks” are the rarest thing of the world, music is an universal language and the basic principle are the same.

“Getting use to it wasn’t difficult, because the technique is not difficult. It resembles other percussion instruments we know. The crux of the angklung is to achieve a complete melody, because each instrument gives an only one key, and it is necessary an accurate reaction of each member of the orchestra, otherwise it’ll sound like a Kendo fight, one of the students jokes.

The donation, more than a present meant a commitment. Playing 35 minutes of music in few months seemed an impossible thing to do. Eugenio Silva, who teaches percussion and is musician of Camaguey’s Symphonic Orchestra, took the project.

The angklung would be a complementary instrument in the conservatory, but soon began to be more and more important. Trapped among classes and rehearsals, spent long nights of insomnia writing music for the instrument; the students tired because of the daily chores, were enthusiastic though.

“At the beginning it was troublesome to compose. I had the music in my mind but it was impossible to arrange it. Then realized that I had to work with a format of symphonmic orchestra, divide by strings and so assemble the melody. The orchestra is formed with 30 musicians, that is that I should direct 15 with each hand,” explains the maestro.

And yes, that was already an orchestra, no only because of its format, but also for its spectacular sonority. It was about time, then, to present the angklung to the Camagueyan audience. The premiere occurred on January 28th, 2007 at the Principal Theatre in town.

The reaction was frigging awesome. The traditional sound of the claves and the conga drums, came out of the angklungs, that for the first time were played by Cuban musicians. However the tunes of Guantanamera sounded so Cuban as always.

The show had been a complete success, yet they had to past, what the conductor called an acid test. A delegation from the Embassy of Indonesia in Havana visited the school in May and invited the orchestra to participate in a gala that would be held the following month, in salutation to a new anniversary of the diplomatic bonds between Cuba and the Indonesian archipelago. Satisfaction and anxiety reigned in the hearts and minds of the young musicians.

The stage and the audience would be totally different. They will not play at home, besides the spectators would be people who really knew about the angklung. “We were a bundle of nerves”, confesses Harold, who also plays the bass.

But once again they showed their talent. The combination of the angklung with the flute and a conga drum left everyone flabbergasted. Musical pieces from that Asian country or scores composed by Camagueyan Gabriel de la Torre, or by Joseíto Fernández, accompanied by dancers of the Art Academy Vicentina de la Torre delighted the attendees.

“They were very grateful because the kids really did their best”, comments Ania Vega, director of the conservatory. “Now everyone wants to see and hear it, and above all after their presentation on July 25th, during the gala that marked the 54th anniversary of the assaults to the Moncada garrisons, when all Cuba had the opportunity to enjoy them on live TV.”

And the point is that so far, these kids and their conductor have done history. 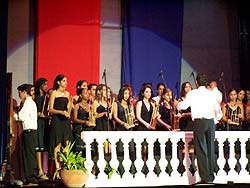 Like all good musicians, they do not feel satisfied with things they have done. The initial process of mounting a song has past, and now they are pursuing more ambitious goals. The compositions get complicated with risky arrangements and the repertoire increases with works by Guido López Gavilán, Ignacio Cervantes, Ernesto Lecuona and José White.

Even professor Silva already wrote his first work “Ritmica in D Major”, that will be premiered at the Plaza San Juan de Dios in the city of Camaguey, and one of the students will graduate playing this score, adapted for the angklung.

Since 1938 the angklung has been internationally renown and several musicians have used is in their recordings. However, it is the first time that its “heavenly sound”, as the Indonesian call it, gets mingled with this catching rhythm, which is the Cuban music.

“We have a long road ahead… so far we are eager to work, to do more tunes. We even want to prepare a big concert at the Teatro Principal with many instruments accompanying the angklung, we are open to collaborate with any project. I think about the jazz music, for instance, with great musicians in Cuba. Fusion could work, said Silva with his mind full of dreams and melodies.

Camagüey, always proud of its culture and traditions, is characterized for being a pioneer province in many fields within the national scope. This Angklung Orchestra joins the extended list of reasons for which those who have been born in the “smooth shire of shepherds and hats”.

Today Camaguey can boast about being the cradle of Cuba’s National Poet Nicolás Guillén, of poetess Gertrudis Gómez de Avellaneda, of scientist Carlos J. Finlay, of the first literary work written in the island and also of the first orchestra of angklung in Cuba. (Translation: Gualveris Rosales Sánchez)