Last solar eclipse of the year and decade will occur 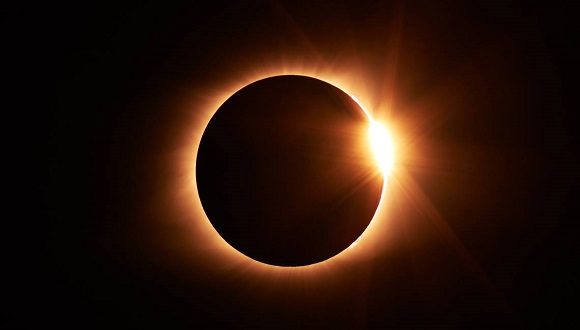 Spectators from Africa, Asia and Oceania are preparing today to witness the third solar eclipse of the year and the last of the decade, which will begin in Saudi Arabia.

Many define this new astronomical phenomenon as a Christmas eclipse as it will take place on December 26, with an approximate duration of five and a half hours.

It will be visible in Saudi Arabia, Qatar, United Arab Emirates, Oman, India, Sri Lanka, Indonesia, Singapore and Malaysia; as well as in the islands of Guam and Wake, belonging to the United States.

The rest of the spectators can enjoy this show through live internet, from the official website of the Special Agency of the United States: www.nasa.gov, or in the specialized portal Time & Date: www.timeanddate .com / live.

An annular eclipse of the Sun occurs when the Moon is farther from our planet and looks smaller than the Sun, which creates a visual effect similar to that of a golden ring or fire.

During this phenomenon the brightness of the Sun maintains its intensity, but a black circle appears in the solar disk that makes it possible to look it staright; which can be dangerous, since the eyes are exposed to radiation for a longer time.

Specialists point out that ultraviolet and infrared radiation can cause damage to vision, so it is recommended not to look directly and always use special glasses. (Text: PL (Photo: cubadebate.cu)