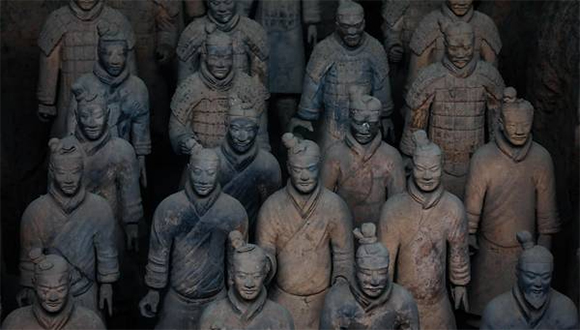 A team of Chinese archaeologists discovered another 200 terracotta warriors and numerous weapons in the pit number 1 of the Qin Shi Huang Emperor's Mausoleum Site, in Shaanxi Province, in the northwest of the Asian country.

During the third excavation, initiated in 2009, experts explored an area of ​​400 square meters in pit number 1, the largest of the three surrounding the tomb of the first Chinese emperor.

In the area were also found 12 clay horses and the remains of two cars, containers, colored shields, swords and bronze arches.

Shen Maosheng, responsible for the excavation, said that most of the newly discovered terracotta statues can be subdivided into two categories, one consisting of warriors who wield weapons with handle, with the right arm folded and semi-closed fists, and that formed by warriors with bows, with the right arm in a natural position.

Shen stressed that the finding enriches the study of the dynasty's military system and military equipment (221 BC-206 BC), also offering new information on the style, characteristics and manufacturing techniques of the statues of the period. (Taken from Cubadebate / with information and photo by ANSA)