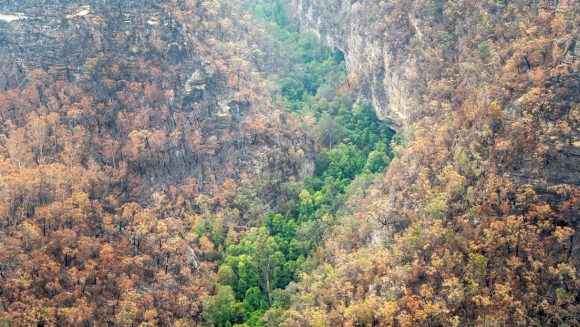 A forest of prehistoric trees in southeastern Australia has avoided wildfires thanks to the action of firefighters.

The trees in question belong to the Wollemia nobilis species, or Wollemi pine, which is believed to have existed 200 million years ago. Until recently it was considered extinct, but in 1994 about 200 specimens were discovered in the humid temperate forests 150 kilometers northwest of Sydney. The species is considered a living fossil, so it is also called a "dinosaur tree."

"Wollemi National Park is the only place in the world where these trees are found in nature and, with less than 200 specimens, we knew that we had to do everything possible to save them," said the New Wales State Environment Minister, Matt Kean.

As fires approached the forest, firefighters threw water and extinguishing agents from the ground and air, creating a fire barrier. A scientific evaluation has determined that, although some of the trees had suffered burns, the species will survive.

In its heyday, Wollemi pine formed extensive forests throughout Australia, New Zealand and Antarctica. But its range was declining until it was reduced to a few kilometers in the Blue Mountains of South New Wales, where Wollemi National Park is located.

The Australian Government secretly keeps its exact location to prevent the action of man can harm these vulnerable trees. (Taken from Cubadebate / With information from Russia Today)