The "fireball" observed in Puerto Rico was a meteorite 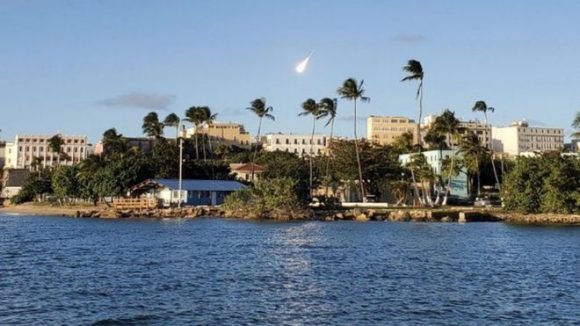 San Juan, Jan. 18 - Thousands of Puerto Ricans across the island on Friday reported on their social networks about the sighting of an object they described as a "fireball" or "meteorite" falling from the sky. The mystery about what exactly they saw was soon revealed: it was a meteor.

According to Juan González Alicea, president of the Caribbean Astronomy Society (SAC), the event that was observed throughout Puerto Rico around 5:30 pm on Friday was a meteor that penetrated the atmosphere.

González Alicea said that the meteor or car was orange with greenish stele, the most common observed, and could be seen for an approximate duration of 15 seconds. Because of the size, he indicated that it can be deduced that it was a large meteor before penetrating the atmosphere.

The graphic reporter Dennis Rivera Pichardo was one of the thousands of people who saw the meteor. According to what he said in an interview with El Nuevo Día, he drove from Ponce to San Juan when he saw the “fireball” in the sky.

“It was crossing just through the letters of Ponce towards San Juan and what was seen was a ball of fire, like blue, very bright and covered with fire around. He went down super fast, like a very impressive ball, ”said the independent photojournalist who has published his work in local and international media such as El Nuevo Día, The New York Times and The Washington Post.

“For now, I thought, it will be a plane, but it was too fast. It was an impressive thing for speed. ” Also, Rivera Pichardo said he saw it as a "very large" object compared to a plane that is seen from the sky.

The event was appreciated in multiple municipalities. Residents of Dorado, Gurabo, Bayamón, Yabucoa, Caguas, among other municipalities, posted messages on social networks that saw a "meteorite."

Luis Muñoz Marín International Airport reported that one of its security cameras captured the "apparent meteor". The airport operation was not affected by the event. (Taken from Cubadebate / With information from El Nuevo Día)