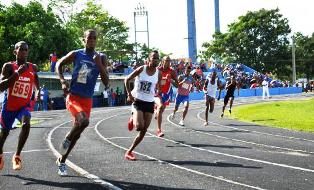 Camagüey, March 9.- The representation of this province concluded in the third position in the ranking by points of the Rafael Fortún National Memory Festival in Memoriam, held during the weekend in this city.

The local runners were preceded in the podium of awards of the athletic contest by the members of Havana and Santiago de Cuba, who in that order occupied the first places.

In the honor roll of the event, Santiago Zulia Echevarría, gold medalist in the tests of 400 flat meters and 400 meters with fences, was selected as the best competitor among women.

In the men's section, the same recognition went to Roberto Skyers, a gold medalist in the test of the 100 flat meters, while Ricardo Molina, from the national team, was the best coach, while Robelkys Fostén was chosen as the best referee. (Luis Florencio Rodríguez / Radio Cadena Agramonte.) (Photo: Archivo / Adelante.cu)