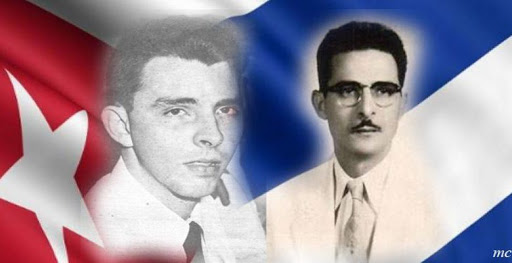 Havana, Jul 30.- President Miguel Díaz-Canel today described July 30 as a sad day in the memory of Cuba, for the murder of Frank País and Raúl Pujol, 63 years ago, at the hands of henchmen from  Fulgencio Batista´s tyranny.

Honor to those who only had their young and promising lives and gave them to the Homeland, Díaz-Canel expressed in his account on the social network Twitter.

“# 30deJulio, sad day in the memory of #Cuba. # FrankPaís and Raúl Pujol are assassinated in #SantiagoDeCuba. The rebellious city dresses 26 and sings the Bayamo anthem. #Today is # DíaDeLosmártires. Honor to those who only had their young and promising lives and gave them to the Homeland, "the president tweeted.

Also in that social network Eduardo Rodríguez Dávila, Cuban Minister of Transportation, wrote that this July 30, Day of the Martyrs in Cuba, the ministry he heads honors the memory of those who gave their lives to make our country a free and worthy.

Eternal glory to those who with plenty of courage, self-denial and altruism made possible the work of the Cuban Revolution, added the head of the Ministry of Transportation.

José Ángel Portal Miranda, Minister of Public Health, added to the tribute, who in his tweet expressed that Cuba today remembers Frank País, who was, in Fidel Castro's words, "a symbol of the entire generation that sacrificed itself."

To him, and to all the martyrs of the Cuban Revolution, our tribute and tribute, and the commitment to always be faithful to his memory, added Portal Miranda.

The Day of the Martyrs of the Cuban Revolution has been commemorated since July 26, 1959, when at an extraordinary meeting of the Council of Ministers it was agreed to dedicate July 30, the anniversary of the murder of the two young men, to the remembrance of those who died in the fight for independence. (Text and photo: ACN)