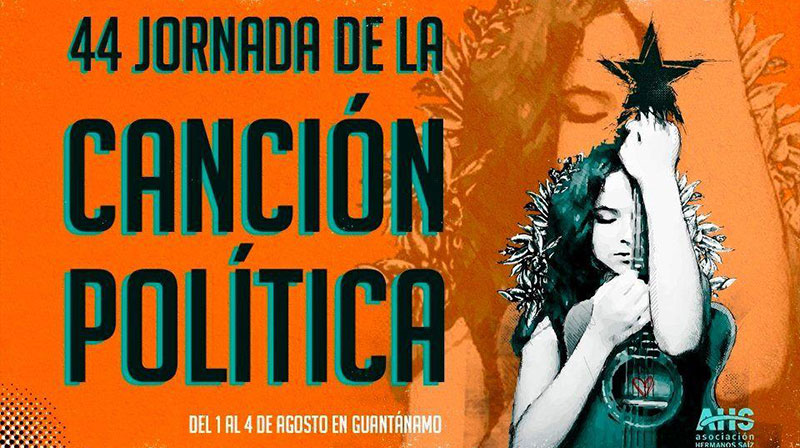 Guantánamo, Aug 4.- The Day of the Political Song, instituted in Guantánamo in 1976, grows in a new context, ratifies the vitality of troubadour´s work annually, and now on the Internet, with the performance of Cuban and foreign singer-songwriters, resizes well positioned, with projection to the world.

Thus, the award-winning writer Eldys Baratute, one of the main organizers and promoters of this patriotic-inspired festival, the oldest of the current ones dedicated in Cuba to the Nueva Trova, stressed to the Cuban News Agency.

The event has the merit of bringing together a historical commemoration with a cultural fact, it was born to honor the revolutionaries who fell at Guantánamo on August 4, 1957, and has become one of the strongest of the Hermanos Saíz Association in the country and mythical for several generations of Cuban troubadours, said Baratute.

A deep, moving, love or combat song can be political if it helps transform, move ideas, feelings, and this is one more viable space to combat the avalanche of avant-garde music of these times, and empower the author song, to prioritize intelligent verse, aesthetic flight and social gaze, to the delight of an audience without mental laziness, he said.

The Conference was created 44 years ago by the idea of ​​Lorenzo Cisneros from Guantanamo and other affiliates of the then Hermanos Saíz Brigade, consecrated the development of subsequent generations of troubadours in the courtyard, and its stages have been prestigious with the performance of stars of the stature of Silvio Rodríguez, Pablo Milanés, Sara González, Augusto Blanca and Pepe Ordás.

The Duo Buena Fe, Raúl Torres, Polito Ibáñez, Liuba María Hevia, William Vivanco, Gerardo Alfonso, Eduardo Sosa, Tony Ávila, among other relevant voices of contemporary Cuban songwriting, have also distinguished several of their chapters, and opened the doors to novels from all over the country, making his work visible.

The current edition is dedicated to the imprint of women in the Cuban trova, praising emblematic figures such as the unforgettable Sara González, who several times attended the event in Villa del Guaso -the last one in 2010-, as worthy heirs of her savia today headline online and television concerts: Liuba, Marta Campos, Heidi Igualada, Yaima Orozco, Iraida Williams, and others.

Today the Political Song Day not only shows its vitality and the sustenance of its founding principles, but also, deprived of its crowded cantatas on the streets, due to the global pandemic crisis, it has managed to resize itself through multimedia, with an attractive program and surprising reception from various platforms, mainly from the internet. (Text and photo: ACN)