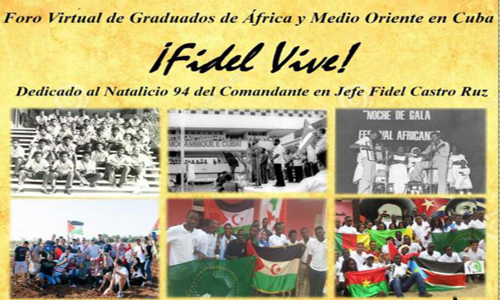 Havana, Aug 12 - Today the First Virtual Forum of Graduates from Africa and the Middle East meets in Cuba, dedicated to the 94th anniversary of the birth of Commander in Chief Fidel Castro, announced in this capital the Cuban Institute of Friendship with the Peoples (ICAP ).

He added that the deliberations take place from 1:00 pm from the headquarters of the Cuban Institute of Friendship with the Peoples, where the president of the latter Fernando González Llort, transmitted messages, as did Dr. Yoandra Muro Valle, Rector of the School Latin America of Medicine (ELAM).

A special interview will also be screened with three professors from the special municipality of Isla de la Juventud who taught at the Schools of Internationalist Education.

The meeting is broadcast live on the ICAP @Siempre Con Cuba profiles on Facebook and YouTube, said the official.