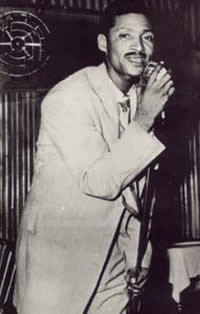 Rhythmical and light-hearted; brilliant and receptive to new trends, controversial and versatile, are words or phrases that fit to define Benny Moré (1919-1963), known as “El Bárbaro del Ritmo”, whose songs were hits in the past and classics now.

In spite of those terms, Benny Moré’s peculiar personality shatters any preconception and glitters like only the true precious stones can do.

His appearance and the way he used his own body to communicate things, including yells in the middle of an improvisation were elements that favoured the link between him and the public. His bizarre clothing and the choreography he did before the crowds were essential elements of his performances. Everything he did was a supreme expression of artistic eloquence.

The old images of Benny Moré wearing a hat, loose trousers with straps and a cane, conducting his orchestra are unforgettable for all Cubans. The figure of El Bárbaro del Ritmo pervaded other latitudes with attractive and catchy singles such as Bonito y sabroso, Dolor y perdón, Maracaibo y Castellanos que bueno baila usted.

Benny also made some forays in the cinema, for instance in the movies Carita de ángel (1946); Novia a la medida (1949); Cuando el alba llegue or Fuego en la carne (1949); and Quinto patio (1956), though in many cases his appearances were brief, and his name did not appear in the casting.

When the Mambo King Dámaso Pérez Prado had his spectacular success in the silver screen, Benny was not playing in that orchestra and when the film Al son del mambo (1950) was produced, Moré’s voice was doubled by another Cuban singer, Yeyo Estrada.

Listening to him merely does not give us the dynamism he used to stamp to his performances. Moré had an original way to conduct his Banda Gigante –orchestra- utilizing his hands, legs, shoulders, cane and his own hat.

When singing to his beloved city Santa Isabel de las Lajas his voice indefatigably modulates the melody, which is a cry and a gurgling at the same time, in a gesture of love for his own town.

With a great personal magnetism, aside from having a crystalline timbre of tenor voice, perfectly tuned, Moré had the capacity to achieve round tones and was a wonderful improviser. But his humility was so great that, on the top of the fame, one day he stated:
“Fame and even money wear me out. As none of those things drive me crazy, I don't flirt with the glory. On the contrary, I reject it.”

The highest circles of the local bourgeoisie regarded him with disdain.

Black and of humble origin he never forgot the times of poverty, the molestations and humiliations that accompanied the men and women of such a condition in that time, even when they were true talented people.

Incredibly he did not know how to read music, but he played the guitar and the tres and he knew how to conduct his musicians, as no one else could do.

Benny Moré died on February 19th, 1963, with his death it seemed that the very Cuban way to speak and the smiling face had disappeared, but thanks to his talent he still remains in his masterly recordings.