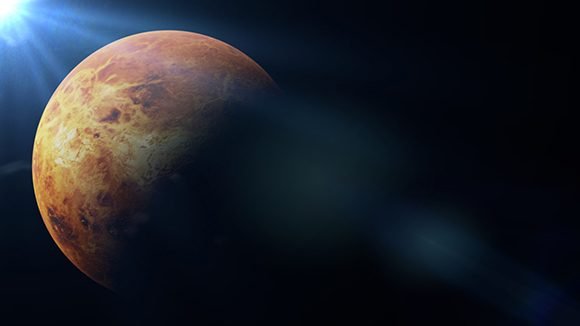 This Monday it was announced that phosphine (PH3), one of the potential biological markers and chemical substances that can show the presence of microbial organisms, was found high in the atmosphere of Venus.

The scientists do not claim that their discovery means that there is life in the upper layers of the atmosphere of Venus, and only indicate that the presence of phosphine shows that there may be chemical processes unknown to science on the planet.

Phosphine is a toxic gas that has no color or odor in its pure state, and on Earth it is associated with organic entities. Inhaling this gas, and especially long-term exposure to it, can cause nausea, vomiting, bronchitis, shortness of breath, seizures, pulmonary edema, liver damage, vision and speech problems, and even death.

Only two ways of obtaining phosphine are known: in the industrial process - the gas was produced for use as a chemical warfare agent in World War I - and as part of some kind of little-known function in animals and microbes. Some scientists consider it a waste product, while others do not.

Phosphine products, used today in the plastics and semiconductor industries and also as an insecticide in stored grains and to make flame retardants, smell like garlic or rotten fish.

The Agency for Toxic Substances and Disease Registry (ATSDR) indicates that phosphine can ignite and explode at room temperature, and in small quantities it can arise naturally from the breakdown of matter. organic.

What does it have to do with extraterrestrial life?

As on Earth phosphine can be the product of anaerobic microorganisms, in 2019 it was proposed to be considered as a biosignature to search for life on exoplanets. Gas meets most of the criteria to be classified in this way, but its detection is quite difficult.

The atmosphere of Venus contains many sulfur compounds and is practically devoid of water vapor and oxygen, making it an extremely unsuitable place for the appearance of protein life forms, but there are theories that accept the possibility that some microorganisms They could adapt to such extreme conditions and live in the upper layers of the planet's atmosphere thanks to complex chemical reactions.

Bio-signatures - and the presence of phosphine remains a potential biological marker - can help confirm or refute this hypothesis.

In the case of Venus, the researchers themselves who were part of the study stressed that the detection of this gas cannot be considered as solid evidence of the presence of microbial life, and only points to geological or chemical processes potentially unknown to the community. scientific.

However, NASA Administrator Jim Bridenstine has called the finding the "most significant advance so far in substantiating the case for life outside of Earth." “About ten years ago NASA discovered microbial life 120,000 feet in Earth's upper atmosphere. It is time to prioritize Venus,”he wrote on his Twitter account. (Taken from Cubadebate / With information from AP and RT) (Photo: File)