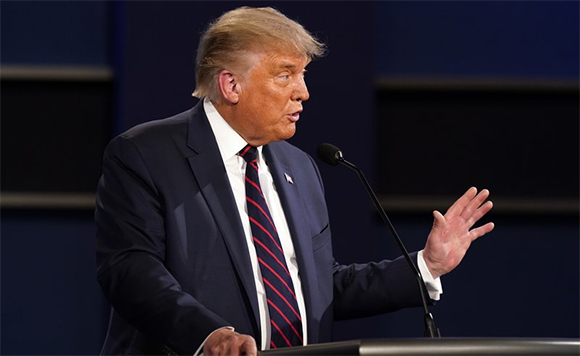 Washington, Sep 30.- The president of the United States, Donald Trump , on Tuesday avoided condemning the white supremacist groups and ignored their role in the episodes of violence in recent weeks in several cities of the country, even when it is proven by investigations and FBI information.

"Almost everything I see is from the left, not the right," said Trump , whose debate with Democrat Joe Biden left the extremist group Proud Boys celebrating what some of its members saw as tacit approval.

The president responded to a question from the moderator of the debate, Chris Wallace, who asked the president if he would condemn the militias and white supremacist groups that have appeared in some protests.

Wallace referred specifically to Kenosha, Wisconsin, where a white teenager was accused of killing two protesters during protests over the police shooting of Jacob Blake, a black man. Trump has repeatedly blamed antifa , a term for the antifascist movement.

“I am willing to do everything. I want to see peace, ” Trump said . "What do you want to call them? Give me a name ”.

Democrat Joe Biden mentioned the Proud Boys , a far-right extremist group that has attended protests in the Pacific Northwest. The male-only neo-fascist group describes itself as "Western chauvinists" and is known to have instigated street violence.

" Proud Boys , stand back, wait," Trump said . "But let me tell you something, someone has to do something about antifa and the left, because this is not a right-wing problem."

FBI Director Christopher Wray told a congressional committee last week that white supremacists and anti-government extremists are responsible for the majority of recent deadly attacks from extremist attacks on US soil.

Trump , who is a Republican, has tried to associate Biden and the Democrats with the episodes of violence that accompanied the largely peaceful protests of the movement against racism and police brutality.

The president has based his campaign on security, warning people that they will not be safe with a Democratic president. It's a message aimed directly at white suburban voters, including women who voted for Trump in 2016 but may not again.

"What we saw was a dog whistle through a loudspeaker," California Sen. Kamala Harris, Biden's running mate , told MSNBC after the debate. "Donald Trump does not appear to be anything other than what he is: someone who does not want to condemn white supremacists."

Several Proud Boys leaders and supporters later celebrated the president's remarks on social media. On a Telegram channel , an instant messaging channel, with more than five thousand members of the group, images were broadcast with the words “stand back” and “wait” along with the group's logo.

Trump said Tuesday that Biden is afraid to say "law and order" and pressured him to give examples of law enforcement backing his campaign. Biden said he was in favor of "law and order with justice, in which people are treated fairly."

Biden described antifa as "an idea, not an organization." It is a description similar to the one that Wray , the director of the FBI, gave , although Trump has asked that the government classify antifa as a terrorist group. (Taken from Cubadebate / With information from AP) (Photo: AP)