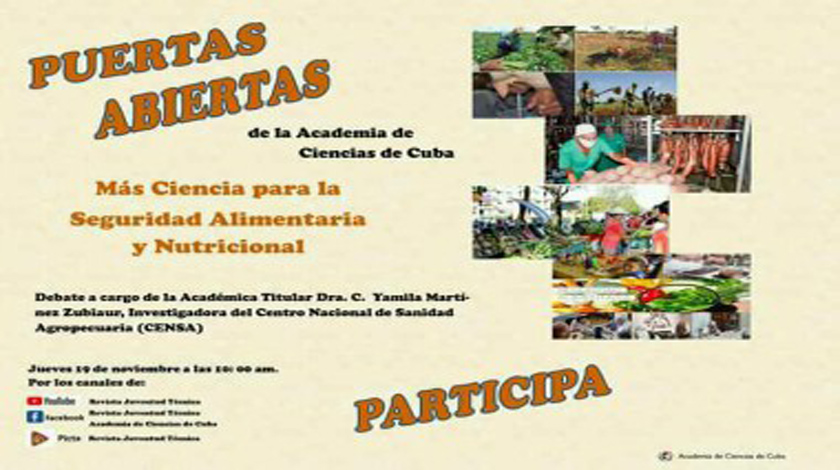 Havana, Nov 19.- The Cuban Academy of Sciences (ACC) will celebrate today, online, another edition of its Open Doors, this time to discuss the contribution of this sphere to food production, a fundamental issue in the country.

The meeting, aimed at debate and information on enigmas and discoveries in the field of scientific knowledge, will be available to everyone from the YouTube channel of the JuventudTécnica magazine , its profile on Facebook and that of the ACC, as well as the digital site www.picta.cu .

The meeting will address aspects related to the work of the scientific community to support an efficiently productive agriculture that meets the basic needs of the nation, and the current difficulties for the introduction of research results in food production.

There will also be an exchange on how the confrontation with the Covid-19 pandemic has influenced science applied to agricultural development in Cuba and its practical materialization.

To answer the questions and report on the subject, the head Doctor of Science Yamila Martínez Zubiaur, specialist in Plant Pathology and Virology, will be present.

Recently, a proposal for an Agrarian Extension Policy in Cuban territory was presented by the President of the Republic, Miguel Díaz- Canel, which, as the president explained, arose as a result of the exchange with representatives of the scientific community and prominent peasants, hence the importance of these analyzes.

The Open Doors of the ACC is aimed at the general population interested in scientific issues, subject to public discussion with the intervention of renowned academics and science specialists. (ACN) (Photo: Taken from CITMAVCL.gob.cu )