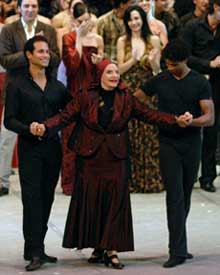 At the end of the closing gala, the director of Cuba’s National Ballet Company (BNC) moved forward to thank the public for the standing ovation it offered in honor of her 90th birthday and her lifetime’s work dedicated to her homeland, and of the historic nature of this edition of the one of the most prestigious festivals in the world.

The program at Havana’s Grand Theater excelled for the variety and excellence of the 12 choreographies presented and the fine quality of Cuban an foreign interpreters, who brought their art to this dance from places like London, New York, Buenos Aires, Berlin and Madrid.

One of the special moments of the evening was the solo entitled Two, in charge of Acosta, guest leading dancer with the Royal Ballet of London, who excelled for his virile and poetic elasticity.

Carreño also delighted the audience with another solo, Sinatra Suite, an elegant choreography highlighted by the celebrated US singer.

Standing out among visitors was Spaniard Tamara Rojo, from the Royal ballet of London, who in Five Wwaltzes by Brahms in the style of Isadora Duncan, brought to Havana the spirit of that mythical ballerina of the early 20th century, dazzling everyone with her personal lyricism.

For their elegance and gracefulness Roberta Marquez and Steven McRae, from the Royal Ballet of London gained the favor of the public, who displayed an impeccable technique in the pas de deux of Sleeping Beauty.

The stars of the Estable Ballet of the Colon Theater of Argentina, Nadia Muzyca and Juan Pablo Ledo, boosted the prestige of that institution with Encuentro, choreography by Lidia Segni with music by immortal musician Astor Piazzola.

Another climax was Doble sentir, choreography by Antonio El Pipa, danced by him, who reminded us, with a lot of mastery, all that Cuban culture owes to Spain.

The gala closed with a real jewel, the premiere in Cuba of fragments of Samsara, a ballet by Spanish dancer and choreographer Victor Ullate with ethnic music pieces from Egypt, Iran, India, Nepal, China and Japan, which, with the vitality of percussion and the excellent interpretation of the BNC, left spirits ready for the next edition, two years from now, of
this universal fiesta of ballet. (ACN)