White Coats by the Gambia River 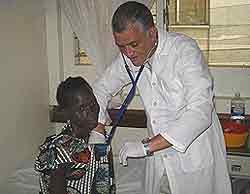 After the triumph of the revolution on January 1st, 1959; the internationalist spirit and of solidarity of the Cuban health professionals have left deep marks of love and hope in the most diverse latitudes of the world.

The altruism, the high scientific skills and ethics of the Cuban medical practitioners have been recognized from the Bolivia highland plateau, to the forests of Central America and from the Venezuelan shanty towns, to the Pakistani Himalayas.

However, Africa has been, in several occasions, the stage where the healing hand of that army of white coats has aided and saved countless lives that would have swelled the huge and chilling figure that draws a veil of desperation and death over the continent, mostly caused by preventive and/or curable diseases.
In the Republic of Gambia, a small country located in the northwest coast of Africa, an important group of Cuban doctors collaborates. One of its physicians is Camagüeyan Arvelio Ballester Pérez.

Gualveris Rosales: Doctor, what reasons inspired you to study medicine?

Dr. Arvelio Ballester: I was always inclined towards medicine, and thought about the possibility to heal people. Time went on, and after living some family experiences, it turned into a need. Being a doctor has been one of the most beautiful things that I have experienced in my life.

I studied medicine at the Highest Institute of Medical Sciences Carlos J. Finlay, in Camagüey and I majored on August, 1985. Since November, 1990 I am a First Degree Specialist in Internal Medicine.

Assistant Professor at the M.G.I. department in the School of Medicine and Health Sciences in Camagüey, Dr. Ballester normally works at the Policlinic Joaquín de Agüero y Agüero (known as the Policlínico Norte) of Camagüey and he is also member of a Basic Task Group (GBT).

Gambia is his third internationalist mission. After his promotion, in 1985, he worked for two years in the mountains of Nicaragua, an experience that “showed him the calamities that other peoples of the world suffer, many of which are already history in Cuba."

Then, in 1997, he went to Africa, exactly to Zambia, where he stayed three years. In 2005, he was picked up to work at the School of Medicine University of The Gambia for a two-year contract, aside from offering services as a clinical practitioner at Banjul university hospital.

CONCRETE ACTIONS CARRIED OUT BY THE CUBAN DOCTORS IN GAMBIA

GR: Reports by the World Health Organization reveal an alarming situation regarding mortality rates and prevalence of communicable diseases in Sub-Saharan Africa. Which have been the concrete actions taken by the Cuban health professional ‘cooperantes’ in Gambia to counteract these evils ?

Dr. AB: The Cuban “cooperantes” represent 95 percent of the medical force in this country, that’s why our job is decisive in the statistics of health. 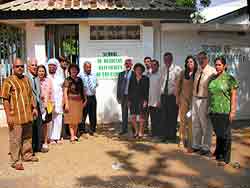 There were not specialized medical attention in Gambia’s rural communities before 1991; this service was rendered by trained inhabitants and midwives. The medical force was concentrated only in the cities, mostly in the capital and in some provincial hospitals.

With the arrival of the Cubans in 1991, the country began to have doctors in big settlements, something that dramatically changed the population’s health conditions, for they started to take actions in favour of the illness prevention and the education of the inhabitants.

Taking into account the lack of knowledge regarding the preventive medicine, when the Cuban ‘cooperantes’ finish their shifts in hospitals and policlinics, they go out to visit their patients in order to detect the risk factors for developing diseases, and influence on the people’s mind to change their style of living, so that they can improve their health, their alimentary and hygiene habits, and the social coexistence.

Our personnel provide services 24 hours a day in the clinical assistance, but also, we actively participate in training local human resources, for instance, in our School of Medicine we recently promoted the first 11 physicians.

Personally speaking, I can tell you that on September 2005 our job was decisive to eradicate a cholera outbreak that occurred in Banjul, an appraisal was made of the epidemic and an integral work system was organized to stem the outbreak and control the situation.

So, we have been able to save many lives and achieve the recognition of the public.

Dr. AB: "The Cuban medicine is endowed with a great humanism that together to our vision of analyzing the problems of health from the community gives us the possibility to help people, not only of healing their affections, this gives our medicine a great integrity.

"This situation has given us a popular recognition, and not in few occasions has made other professionals from other parts of the world who work here to feel jealous. Our example is the cornerstone in the formation of the medical force in Gambia."

"In other words, I can tell you that when one has the chance to work overseas, one really understands the great quality of our medicine."

Later on, the Camagüeyan doctor explained how from the arrival of the Cubans to Gambia an evident change in the health context of that subtropical country is seen, and how is publicly recognized the collaboration of Cuba in diverse scenes.

To the question of which have been the saddest moments and those of biggest realization as a professional of the medicine and as a human being in this mission? Ballester pointed out:

"Difficult moments are those in which one isn’t capable to treat a patient because the right drug is not available in the right time, or because of the abject poverty of most of the people, they are limited to pay the full treatment.

"The moment of fulfilment have been those in which I’ve seen the academic performance of my students, their interest for knowing how is the medicine in Cuba, and their gratitude to our people and the Commander-in-Chief Fidel Castro, for our presence here.”