Camagüey: Trailblazer in the Cuban Efforts in Favor of Literacy 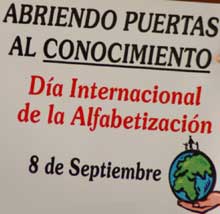 When on September 8th the International Literacy Day is observed worldwide, for the Cuban people and mainly for those who live in Camagüey, this day gains momentum with the commemoration of the 50th anniversary of the declaration of Cuba as the “first illiteracy-free country” in Latin America.

On September 26th, 1960, speaking to the UN General Assembly, Fidel Castro announces the beginning of the literacy campaign: "Cuba will be the first American country to say, in a few months, that no illiterate is left”.

The year 1961 is declared “Year of Education” in Cuba, and it triggers a tireless battle against illiteracy. In the closing meeting of a string of discussions on “Education and Revolution” Fidel stated on April 9: "There cannot be Revolution without education. We don’t tell the people: believe! We tell them: read!”.

Visionary Fidel Castro urges the people to learn how to read and write, study, be informed, think by themselves, reason, and analyze.

The National Literacy Congress is held from September 2-5, 1961 to boost the last stage of the campaign.

Some 700,000 Cubans were alphabetized during a year, so the illiteracy rate lowered to 3,9 percent of the total population. This result places Cuba among the nations with the lowest illiteracy rates across the world.

To make this extraordinary feat, slightly over 271,000 teachers and young voluntary literacy educators taught the first letters to those residents in far-off places of the Cuban geography.

Eight months after the Bay of Pigs victory, Cuba proclaims itself an illiteracy-free territory on December 22, 1961.

Camagüey province was a pioneer in conducting the literacy campaign, when in 1960, a group of young people gets involved in this task in the province’s northern portion, known as Cayo Coco, and a brigade dubbed Los Coquitos is set up.

In addition, Camagüey-resident professional EdD Leonela Relys Díaz contributed in a greatest degree to the making of the current Yo sí puedo (Yes, I Can) teaching method and was also participant of the 1961 literacy campaign.

The experience of this woman aired by radio stations in the neighbouring Republic of Haiti was the origin of the method which is used today in many countries around the world and was created on March 28th, 2001, after an initiative by Commander-in-Chief Fidel Castro.

“Yes, I Can” is a complex teaching method, where numbers are used to facilitate the learning process of reading and writing skills. This links numbers and letters and was designed for people over the age of 15 who never attended school or only passed some grades and then forgot what they had learned.

The method can also be found in Braille system, for people with hearing impairment and mild intellectual disabilities.

Because of the international approach of this method conceived by a Camagüey’s local teacher, it can be adapted to different social realities and languages.

Recent reports reveal that nearly 5 million adult people in 28 countries have been taught to read and write so far.

The results of the Cuban literacy method “Yes, I Can” have been acknowledged by UNESCO.