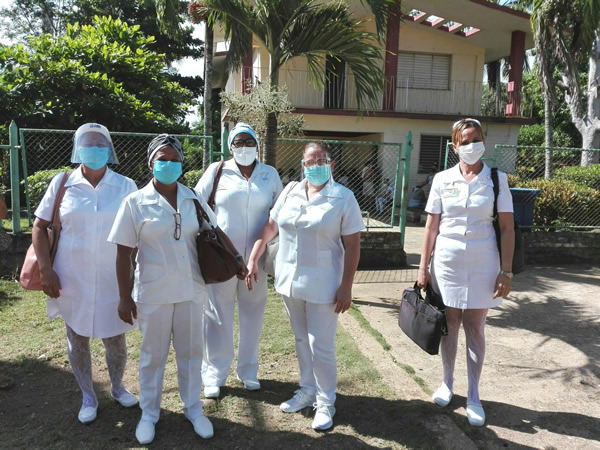 Marta Rodríguez Gallo is a nurse at the Eduardo Agramonte Piña Pediatric Hospital, in the city of Camagüey, and by chance of life and sense of duty she came to the Santa Cruz community of Haiti, a town more than 80 kilometers away from the provincial capital, where the contribution of this professional and her colleagues from the Nursing Contingent created in the province was required to help the municipalities and thus advance the mass vaccination process.

“We have come to support the health area so that those who are missing are vaccinated and thus be able to avoid greater consequences, because the vaccine does not free us from getting sick, but from reaching serious or critical states”.

From the Benito Viñales La Rosa junior high school in the demarcation, this professional worked together with other nurses in the area such as Marlenis Padrón and Yoandry Fall, called on them to continue taking care of themselves and using the mask constantly, washing their hands and distancing themselves to avoid the spread of the disease.

“It has been a very nice experience to help the municipalities and since May we have been in this vaccination team, first for our workers and then for the population. We have already been to Minas and this is the fourth time that we are in Santa Cruz del Sur. This Tuesday a group was in the popular council Cándido González and another here, in Haiti. I like this very much, I am very happy because educating children is a very beautiful job and nurses are educators par excellence”.

This experienced professional with 52 years of work in the sector and always working in the attention to the different groups of pediatric ages from the largest institution of this specialty in the city of Camagüey, also shared the day with Yudimí Hernández Rojas.

From the local stomatological clinic, where a vaccination center operates, this girl gave her contribution to the application of the first doses of the immunogen Abdala to those who suffered symptoms associated with COVID-19 and to others who, being free of the virus, completed their vaccination schedule.

“We do not have schedules to finish, as long as there is a patient here we are. My husband helps me and takes care of the girls at home so I can come here and support the vaccination”.

These outstanding professionals are part of the Nursing Contingent and with great willingness and willingness they shared experiences, knowledge and an arduous day with workers in the Haiti health area and its inhabitants in the four vaccination centers in the area and in rural settlements such as Becerra and Macuto, where they also arrived by means of a transport that was guaranteed to them as part of the union of the factors of the popular council.

During the day mothers like Yunierkis Marrero thanked the help offered by the nurses from Camagüey and the possibility that their children of 8 and 17 years old received the drug. “For me it is a satisfaction that they are immunized against this virus that is attacking our country; I was anxious for this moment to come and today I am very happy and confident of Cuban science. Since they were born, they have been vaccinated against other diseases and until now they have not gotten sick”.

In the mass vaccination process, the Haitian town had considerable delays and with the help provided this Tuesday, 389 people received the first dose of Abdala, another 12 the second, 13 the third and in the case of pediatric ages to 140 children and adolescents received Soberana 02 and other groups of older adults received the third dose of Biomodulin T.

The contribution of the nurses from Camagüey and the different factors of the area and the municipality made it possible to advance in the vaccination process in the Haitian community in the midst of the complex epidemiological situation that Santa Cruz del Sur shows, when at the end of the second fortnight of The month of September was the fifth municipality in Cuba to present the highest incidence rate of COVID-19, as reported in a television appearance by Dr. Francisco Durán, National Director of Epidemiology, while in the first days of October there were already more than 200 positive cases. (Photos: by the author)