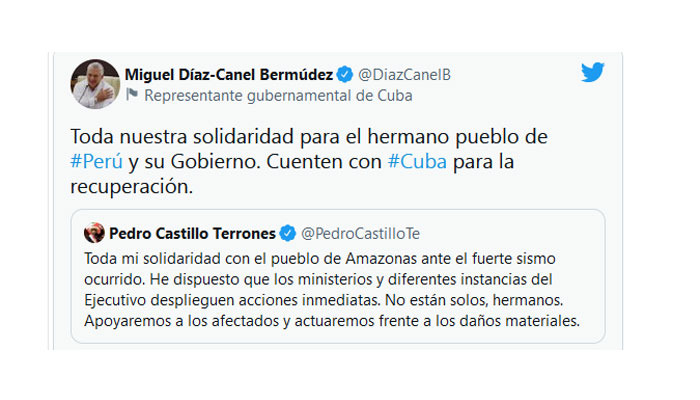 Havana, Nov. 29 - Cuban President Miguel Díaz-Canel, expressed through his official Twitter account, his solidarity with the Peruvian people and government in the face of the strong earthquake that shook the nation at dawn this Sunday.

All our solidarity for the people of #Peru and its Government. Count on #Cuba for the recovery, the president wrote. The Cuban head of state replied to a tweet from his Peruvian counterpart Pedro Castillo Terrones in which he transmitted "All my solidarity with the people of Amazonas in the face of the strong earthquake that occurred." I have arranged that the ministries and different instances of the Executive deploy immediate actions. You are not alone, brothers. We will support those affected and act against material damage, said the Peruvian statesman.

A report by the Prensa Latina news agency, dated in Lima, states that only material damage was reported today after a high-intensity earthquake in the north-eastern Amazon region, where the National Institute of Civil Defense continues to evaluate the consequences of the earthquake.

The municipal authorities of various towns in the Condorcanqui provinces reported landslides and other damage caused by the 7.5 magnitude earthquake that was felt in almost the entire country and in Ecuador and Colombia.

The source points out that according to the Peruvian Geophysical Institute, the earthquake occurred at 05:52, local time, with an epicenter 98 kilometers east of Santa María de Nieva in Condorcanqui, Amazonas, in the northern jungle of Peru and at one depth of 131 kilometers. (ACN) (Photo: Radio Habana Cuba)