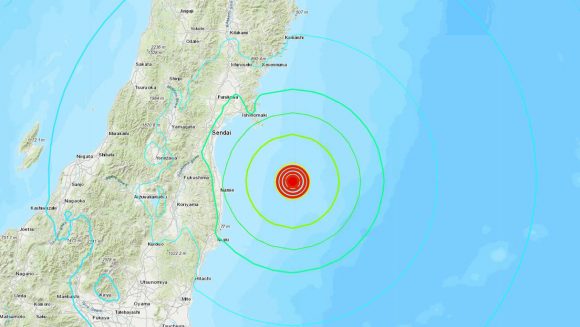 Fukushima, Japan, Feb. 13. - A 7.0 magnitude earthquake was registered this Saturday off the coast of the Japanese prefecture of Fukushima, according to the US Geological Survey (USGS, for its acronym in English).

The earthquake was located about 90 kilometers northeast of the town of Namie, in Fukushima prefecture, while its focus has been located at a depth of 54 kilometers.

Authorities have not issued a tsunami alert. Nor have there been any reports of victims or material damage.

Although the earthquake does not appear to have caused significant damage at the moment, the Prime Minister of Japan, Yoshihide Suga, has called an extraordinary meeting of his emergency cabinet.

Nor has the Tokai nuclear plant registered any problems during the earthquake and is operating normally, according to a statement collected by the Japanese public chain NHK.

Several users took to Twitter this Saturday to share images about how the 7.0 magnitude earthquake that shook Fukushima prefecture and Tokyo shortly before was felt. (Taken from Cubadebate)