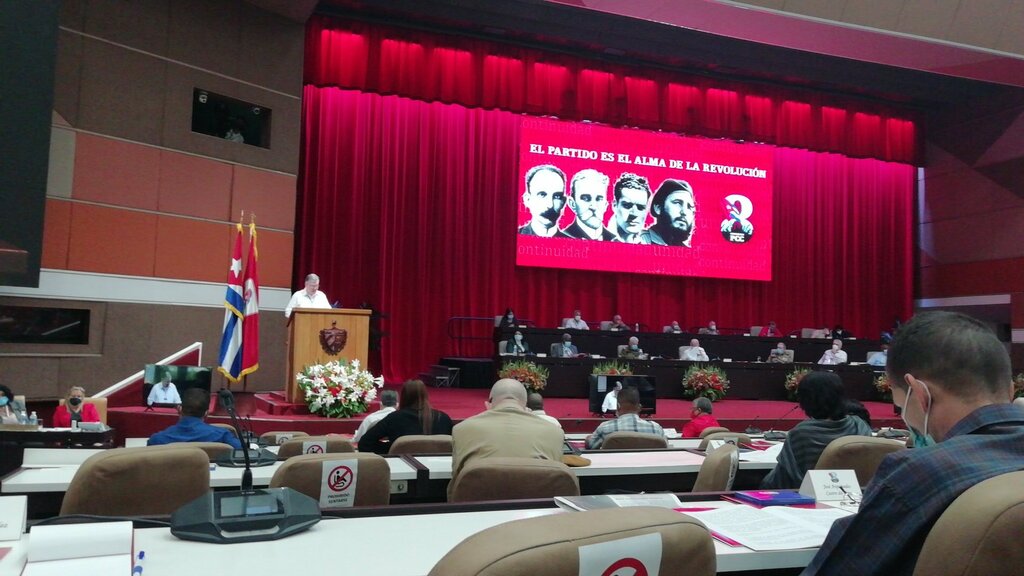 Havana, Apr 18 - The VIII Congress of the Communist Party of Cuba (PCC) spoke today in defense of the revolutionary process and socialism in the Caribbean nation.

This is how the delegates to the conclave decided to approve a resolution on the Central Report to the congress that was presented on April 16 by the first secretary of the PCC, Army General Raúl Castro, who heads the plenary meeting of the forum.

President Miguel Díaz- Canel , a member of the Political Bureau, also participates in the session, led by the second secretary of the Party, José Ramón Machado Ventura.

The resolution considers that the Central Report evaluates with objectivity, fairness, clarity and critical sense the tasks carried out by the PCC and the people in the last five years.

It indicates that the existence of a single party compels to promote the broadest democracy within it and in society and a permanent, sincere and deep exchange of opinions that is not always the same.

In this regard, it is pronounced for strengthening the bond with the working mass and the population and ensuring the growing participation of citizens in fundamental decisions.

The unity of the vast majority of Cubans around the Party must be guarded and never accept the division among the revolutionaries under false pretenses of greater democracy, the document says.

He adds that this would be the first step to destroy the Revolution from within.

The Central Report, he notes, calls for revitalizing the actions of Cuban mass organizations in all spheres of society and updating their operation.

The text endorses the principle that the ownership of all the people over the fundamental means of production constitutes the basis of the real power of the workers.

Regarding this, the resolution considers that the state business system is called upon to demonstrate and consolidate that it is and will be the dominant form of management in the economy.

In the congress, which ends tomorrow, 300 delegates participate representing the more than 700 thousand militants of the PCC, under strict sanitary measures in correspondence with the current situation caused by COVID-19. (PL) (Photo: ACN)