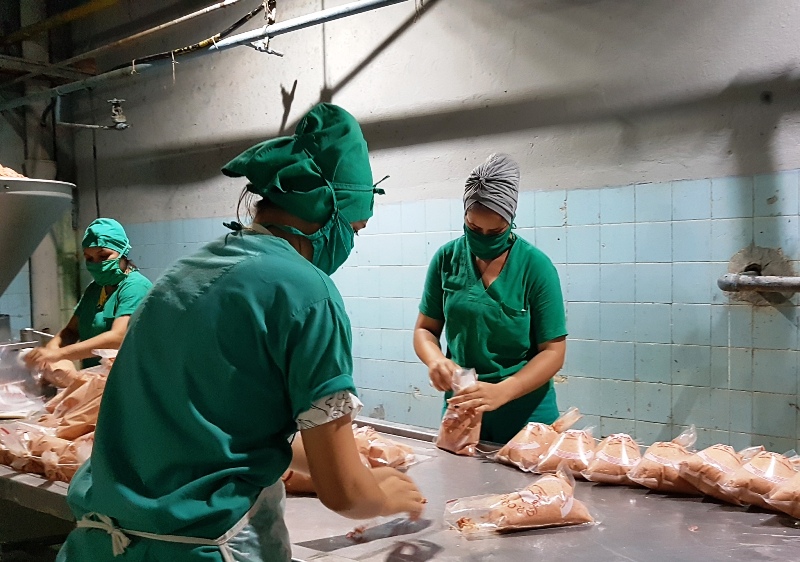 Camagüey, Apr 20 - The impact of the economic, commercial and financial blockade imposed by the United States against Cuba in the food industry is latent in the case of the Raúl Cepero Empacadora in this city, unable to acquire new equipment, and whose collective with own innovations maintains a technology with a high degree of obsolescence in operation.

It recently received the National Vanguard Flag, maximum encouragement from the Cuban Workers' Central and the National Union of the Food and Fishing Industry, in recognition of the fulfillment of its production plans despite its limitations due to that task to keep a plant operating with more than 90 years of founded.

Milene Rodríguez Suárez, director of the factory, told the Cuban News Agency that they are currently working on improving the construction conditions of the area where the croquettes are made and made, a place where more than four tons of that food are processed daily in two shifts.

New ceilings and floors are also installed in the sausage department, but with regard to machinery we continue to work with them, which sometimes, due to breakages in their parts or pieces, stop routines until the mechanics can provide solutions through innovations, he explained.

A little over a year ago, thanks to the work of those colleagues, the ovens and bins were repaired, he said, and new ammonia and evaporative compressors were installed in the engine room, components previously in very poor condition.

In the absence of such an asphyxiating economic siege by the United States over this industry, Cuba would have a nearby market where it could acquire technology for its factories in a more economical way, because by doing so through third countries by the Helms-Burton Act, everything becomes more expensive, added.

However, Rodríguez Suárez assured that the efforts of the workers will not stop with the available resources to keep the entity active, as they have achieved so far.

Here we elaborate, among other lines, a plan of more than 200 tons of mortadella monthly to cover the demand of the provincial capital and other municipalities, which requires maximum use of raw materials, since sometimes these do not have the necessary quality and we are forced to implement alternatives, he added.

The Cepero Bonilla starts each day their work in different lines at three in the morning, in two shifts, with a total of 260 workers directly linked to production, as total the company has 370 workers.

According to a report issued last January by the Ministry of the Food Industry, the effects in this sector cause higher expenditures due to the difference in prices for the acquisition of resources with suppliers from other countries.

The document stated that changes in the exchange rate, since it is necessary to carry out a significant number of operations in euros, instead of dollars, forces us to work with larger inventories due to the distance from the markets, unnecessarily immobilizing resources. (Text and photo: ACN)