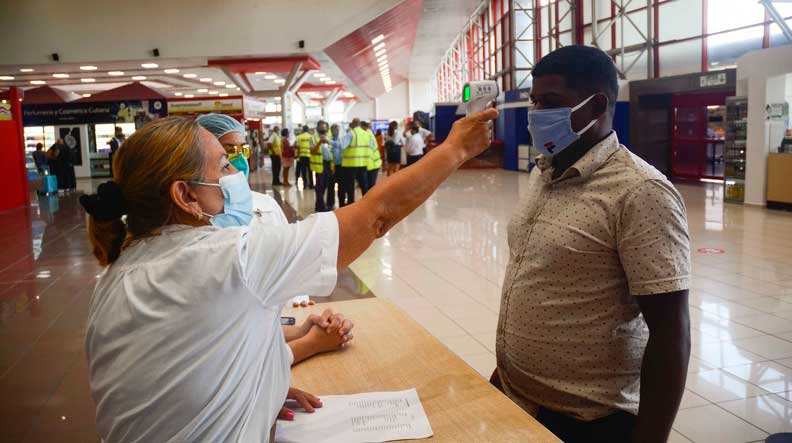 Havana, April 20 - On February 6, Cuba put into practice new health protocols for travelers who arrive in the national territory, and from that date the country maintains all measures for the management and control of imported Coronavirus cases.

As reported by the island's Ministry of Public Health (MINSAP), until April 16, of the 42,364 people who arrived in the country, only 909 people were detected with the disease and, of them, 83 percent (759) They are of Cuban nationality, with a higher incidence in those who return from Russia, Spain and the United States.

According to Dr. Carmelo Trujillo, head of the Department of International Health Control of MINSAP, at the end of last year, when the numbers showed a low transmission of the new coronavirus in the nation, it was decided to isolate travelers in their residence or at the address declared by them.

Trujillo, quoted by the MINSAP website, pointed out that the measure was well executed in some spaces such as hotels, but it was not like that in the communities, where the spread of the disease increased due to non-compliance with the established measures.

It was possible to verify in the field that some travelers did not maintain isolation during the seven days arranged and there were difficulties with the transmission of the information of the PCR (polymerase chain reaction); This impacted on the increase in the number of confirmed COVID-19 in the last weeks of 2020 and the first month of the current year, due to their relationship with the inhabitants of the communities, explained the head of International Health Control.

Faced with this scenario, says the MINSAP, the country's leadership resumed isolation in the institutions designated by the authorities in all provinces, and the number of flights to the island was also reduced, especially from countries with a delicate epidemiological and health situation.

It reinforced epidemiological surveillance by conducting a first real-time PCR test upon arrival of travelers at the airport and a second on the fifth day of their stay in the isolation center.

As a result, currently the average number of citizens arriving in the country from abroad ranges between 750 and 800 people, a control that has allowed a reduction in the number of imported cases, especially flights from the United States, Russia and others from Latin America.

The sanitary protocols for international travelers will remain in operation until the country provides it; Although the decrease in flights from abroad affects the country economically, Cuba's priority is to reduce the incidence of the disease throughout the national territory. (Text and photo: ACN)