The heroic tradition of the Moncada endures in Camagüey

"It seemed that the Apostle was going to die in the year of his centenary, that his memory would be extinguished forever, such was the affront! But he lives, he has not died, his people are rebellious, his people are worthy, his people are faithful to his memory, (…) Cuba, what would you be if you had let your Apostle die! " 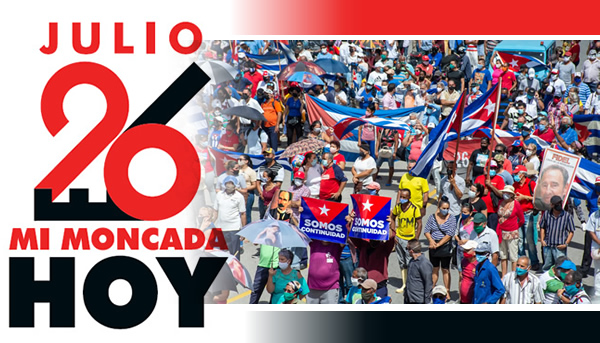 This was expressed by the then young lawyer Fidel Castro Ruz in his self-defense plea known as La Historia me Absolverá, referring to the revolutionary action carried out by a group of Cubans who, with courage and dignity, placed themselves at the forefront of the struggle for the true independence of Cuba on a day like today, exactly 68 years ago.

Just in the centenary year of the birth of José Martí, those brave, led by Fidel, revived the patriotic, independence and anti-imperialist teachings of the Apostle of Independence, when they forged with the assault on the Moncada, Santiago de Cuba, and Carlos Manuel de Céspedes barracks, from Bayamo, the new emancipatory deed of the Cuban people that materialized with the glorious triumph of the Revolution on January 1st,1959.

After 68 years of those events, the ideas of Marti and the teachings of Fidel are still alive and multiplied in millions of worthy patriots, ready to die in defense of the sovereignty and independence of the Homeland if necessary.

Since last July 11, the country has been the target of mercenary and destabilizing actions as part of the unconventional war orchestrated and encouraged by the United States government in its desire to destroy the Cuban Revolution.

The hatred and violence unleashed by a minority exacerbated by the media manipulation generated in the social networks of the Internet have received the energetic response of the true revolutionaries, of those who love and found, of those who build and maintain high the colors of the national flag without renouncing the glory won.

The blood shed by many of the assailants on the Moncada and "Carlos Manuel de Céspedes" that historic dawn of Santa Ana was not in vain.

The sons of the brave Camagüey are convinced that there is no perfect work and that there are many problems to be solved to achieve the satisfaction of the population.

We know our shortcomings, now exacerbated as a result of the resurgence of the obsolete blockade imposed by the United States government on Cuba, added a little more than a year ago to the terrible COVID-19 pandemic that hits us, but the shame of Agramonte assists us to solve the difficulties with popular participation and advance towards new victories together with the Communist Party of Cuba and without interference or humanitarian intervention from the empire.

Fidel: this is our Moncada, the Moncada of the grateful that will continue to stand firm and put our hearts to the beautiful work you built, always sure of the triumph because we are your legacy, because reason helps us to make each 26th of July the most joyous day in history.