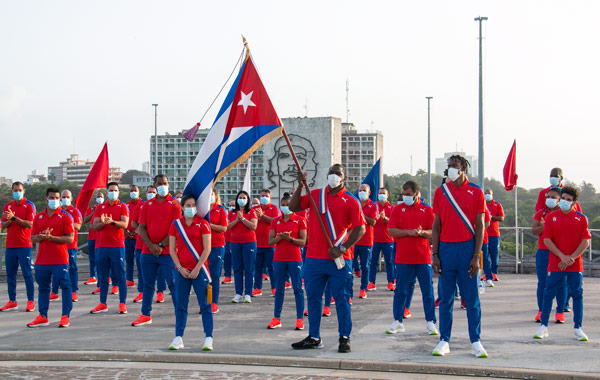 Tokyo, Jul 26.- “Committed to the Revolution of which it is the fruit, the National Institute of Sports, Physical Education and Recreation (INDER) joins today the celebrations for the 68th anniversary of the attacks on the Moncada and Carlos Manuel de Céspedes” barracks, said here its president, Osvaldo Vento Montiller.

His words closed the commemoration of the event by the Cuban delegation attending the XXXVII Olympic Games, conceived in virtual format based on the protocols imposed by COVID-19.

"We ratify the most energetic rejection of the aggressions orchestrated from the United States with the purpose of destabilizing a country that will never give up," said the executive, who highlighted the majority support for the Revolution and the permanent leadership of Commander in Chief Fidel Castro Ruz.

"From this combat post, we will continue to deserve the monitoring with which millions of compatriots support the performance of their athletes from the Island," said Vento, whose intervention also included an emphatic denunciation of the economic, commercial and financial blockade imposed on the Island by the United States.

"We reiterate the irrevocable decision to be faithful to the fighting tradition in which the feat of July 26, 1953 was inscribed with blood," he said shortly after the weightlifter Ludia Motero highlighted the meaning of the National Rebellion Day.

"We confirm that each day to come will continue to be an expression of the values ​​defended by the centennial generation," said the athlete, sixth in this event.

Declamations made by the marksman Laina Pérez and audiovisual cuts related to the events that changed the history of Cuba completed the material, transmitted by the Facebook profiles of INDER and the digital newspaper JIT. (JIT)