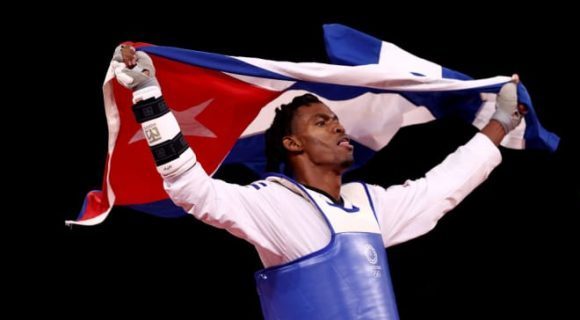 Tokyo, Jul 27.- In a close fight against the Chinese Hongyi Sun, the two-times Cuban world champion Rafael Alba won the first Olympic medal for Cuba at the Tokyo 2020 Olympic Games.

With a final score of 5-4, Alba scored a point ahead of Sun with just one second left to conclude the fight and, in this way, achieved the bronze medal in his discipline.

In the first round he gave 1-0, then he finished the second with three additional points against two of his opponent and, in the contested last round, after a kick from his opponent that equalized the fight, the Creole athlete broke the tie at the last moment.

Rafel Alba, after losing his first match to Dejan Georgiesvski of North Macedonia today, managed to advance to the playoffs and beat Ivorian Seydou Gbane 8-2.

In this way, Cuba is already in the Olympic medal table with its first medal in Japanese lands, on a day where combat sports saved the honor of the Caribbean nation. (ACN) (Photo: Cubadebate)