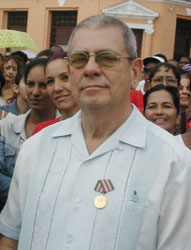 Pedro Pino Estévez was almost a child when he joined an experimental group of 11 adolescent voluntary teachers to go off to Cayo Coco –an inhospitable cay to the north of the then Camagüey province- to put into practice what would later become the basis of the massive Literacy Campaign that was held in Cuba in 1961.

“This was a brainchild of poet and teacher Raúl Ferrer who emphasized on the need to form experimental brigades in our six provinces –in which Cuba was then politically divided- to take them as a pattern for the eventual literacy campaign in which 100,000 literacy workers would be involved to literate over 700,000 Cubans”, Pino Estévez recalls.

“The spelling and the teacher’s books had already been tested with positive results, but the fact that parents allowed their young children, especially girls, to go to far-away places was a real problem. That was a very difficult issue to deal with for the Cuban society of those years”.

“Teacher Marcelo García, who was a member of the Comisión de Alfabetización (Literacy Committee) met the student leaders of the Esteban Borrero and La Avellaneda Junior High Schools in Camagüey to form a 12-member brigade that would leave for Cayo Coco”.

Pedro Pino Estévez and his comrades had to endure a lot of harsh situations in that cay, which was almost inhospitable and a proof that ignorance was an evil that had to be eliminated in Cuba.

However, “more than teaching, we learnt a great deal. In just a few days, we ceased being kids, and became more capable and revolutionary young people”, says the founder and former rector of Jose Marti Pedagogical University in Camagüey.

Years later – in the early 21st century – as a representative of Cuba’s Ministry of Education and First Secretary General of the Cuban Embassy in Mexico, EdD Pedro Pino Estévez contributed to the application of the successful “Yo Sí Puedo” literacy method in that Latin American nation, drawn up by also Camagüey-born and prestigious educator Leonela Relys.