Cuba’s Literacy Campaign 50 Years Later, an Experience that Has Been Shared 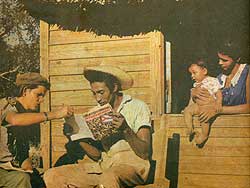 When Cuba was officially proclaimed an illiteracy-free territory on December 22nd, 1961 at a throng Havana’s Revolution Square, the nation was just setting the foundations for an educational system that has always been guided by Jose Marti’s principle “with all and for the benefit of all”.

The educational battle that took place in the westernmost island of the Caribbean proved that both literacy and education as a whole had been successful owning to the political will and the combined effort of all factors existing in society, without scorning other aspects, mainly technical and organizational ones, which are typical of this kind of feats.

A research carried out in 1984 by the United Nations Educational, Scientific and Cultural
Organization (UNESCO) on experiences of this sort in eight different countries, concluded that the literacy campaign in Cuba –aside from its amazing outcomes- was very intensive and quick.

But the Cuban Revolution –driven by its humanitarian and altruistic leaning- channeled its efforts into sisterly countries, where millions of people have learned how to read and write thanks to the Cuban literacy method “Yo Sí Puedo” (YSP), developed by Camagüey-born teacher Leonela Inés Relys Díaz.

Since YSP was first put into practice in 2002 in the neighboring Haiti until now, the Cuban method has been used in 28 nations worldwide, where over 5,5 million people have been taught to read and write.

The method's structure is simple and supple, capable of being adjusted to the specific conditions of the country or region in which it is being used, and it can be fully applied in an interval of time that can vary from seven weeks to three months.

YSP also exists in systems for visually impaired people (Braille), for people with hearing disabilities and for people with minor intellectual dysfunctions, and in all cases the results have been favorable.

Firstly used in Latin American countries, YSP literacy method has benefited people in Nigeria, Guinea-Bissau, Mozambique and South Africa, once it was adapted to the languages of these countries, their historical, geographical and social conditions.

Other experiences have been successful in New Zealand and the Spanish city of Seville, where YSP makes its first appearance in Europe, where it is said there are at least 35,000 illiterate people.

YSP won the King Sejong Literacy Prize in 2006 granted by the UNESCO to Cuba’s Pedagogic Institute for Latin America and the Caribbean, for having successfully promoted this method in the above-mentioned countries.

Fifty years after the Literacy Campaign was carried out by Cuba in its own soil, this great educational feat touches, with the light of knowledge, other lands of the world in a bid to light the minds of the peoples and step up the ladder of human improvement and peace.