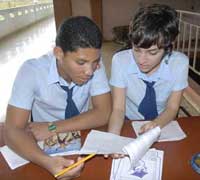 The issues of investments, profits, the cost of education, among others -especially in secondary and university levels- have caused one of the most prominent conflicts in the region this year.

In Colombia, the students' movement had the government of President Juan Manuel Santos on the rack. President Santos had to cede to the pressure after a long strike rejecting a law reform that could have privatized the sector.

Although it might seem that the protests in Chile and Colombia have nothing to do with the "outraged" movements in Europe, the USA, the Middle East and other regions of the world, the relation is evident.

While people tired of the capitalist system are protesting against the predominance of banks and corporations, Chilean and Colombian young people were demanding an education accessible for everyone, without profits.

In Chile, students lighted the flame for social struggle, after almost nine months of marches, strikes, and occupations of educational centers and exposed a hidden reality within the economic rebirth of this South American country.

The complaints of the young people, who never gave up their struggle for non-profit education provided by the state, other sectors joined their voice, including miners, environmentalists and public officers, among others.

More than 80 percent of the population -according to different polls- support the demands of the students, which have led to the biggest demonstrations since the fall of the Augusto Pinochet dictatorship in 1990.

Most of the demonstrations were "accompanied" by police repression, recalling the years of the Pinochet dictatorship.

The historical origins of the student movement is nothing other than the ever increasing social divisions caused by the unequal distribution of wealth, resulting from the neoliberal model imposed on the country more than 20 years ago, according to the student leaders.

Education, like everything else, became mere merchandise in the neoliberalist logic. The Chilean government contributes only15 percent of the finances for education.

The cost of Chilean university education, compared to the Gross Domestic Product per capita, is the highest in the planet, above South Korea and the US, while public expenditure on higher education is the lowest in the world, with only 0.5 percent of GDP.

However, in 2000, UNESCO member countries committed themselves to reach the goal of allocating 6 percent of the GDP to education. A recent report by the UNESCO, warns that education in Chile fosters inequality.

Referring to this study, a former UN rapporteur on the right to learning, Vernor Muñoz, pointed out that the system characterizing education in Chile is oriented by privatization, which tends to result in segmentation, exclusion, discrimination and selectivity.

The UN study notes that the system of scholarships and subventions in the Chilean educational system "protects and benefits the private sector", which excludes the interpretation of the concept of education as a public benefit.

Such a situation has forced thousands of Chileans to move to other countries of the continent, such as Argentina, to take advantage of the free courses offered in the public universities.

Students were opposed to the project, considering it a step to privatization of education, because it fostered private investments and the creation of universities for profit, besides violating autonomy by giving the ministry greater control over public education centers.

Multitudinous demonstrations took place, flooding the streets of Bogotá and other cities of Colombia. Many initiatives characterized the peaceful protests, which often ended with repressive actions by the police.

In Colombia, young people also attracted the support of relatives, professors, social and cultural sectors, among others.

In contrast to the Chilean government, which has presented proposals for a solution that do not respond to the demands, the administration of President Juan Manuel Santos in Colombia agreed in November to propose a new draft law including proposals from the students themselves.

Nevertheless, Colombian students said they would remain alert, and will call for new mobilizations if the promised changes are not made.

Both movements shook the political stage of these two South American countries, still without real plans to eliminate the enormous gaps that characterize their respective societies, and which has always flourished in the education system.

And the two movements coincided on the need to introduce an education with quality, increase the budget and provide inclusion, which runs counter to the policies of power groups that wish to profit from education and maintain their domination of the society.

Meanwhile, in other countries such as Venezuela or Bolivia, the panorama changes for the benefit of their populations.

Teaching people to read, write and count was the first task accomplished by their respective governments to transform education and eliminate illiteracy, which still prevails in South America, especially among the poor.

Basing itself on the principle that a country's main wealth lies in the level of knowledge of its people, the government of Evo Morales destines a good part of the resources coming from its sustained economic growth to social programs, especially those related to education.

A new program in Bolivia is the consolidation of the post-illiteracy campaign process, after becoming a country free of illiterate people on December 20, 2008 with the support of Cuba and Venezuela.

UNESCO evaluated the Bolivian experience as positive and useful to reach one of the goals of The Dakar Framework for Action, Education for All: Meeting Our Collective Commitments, adopted by the World Education Forum in Dakar, Senegal, 26-28 April 2000.

In addition, the Avelino Siñani-Elizardo Perez Education Law was put into practice, with which, according to Evo Morales, Bolivia will stop having an alienated and subordinated education, and instead promote a liberating, revolutionary education.

The education law has 92 articles, 12 temporary regulations, establishes compulsory education up to high school and calls for equality in education, respecting cultural and linguistic diversity and strengthening identity.

Venezuela also fostered a literacy campaign as a first step in a chain reaching to higher educational levels.

Through the Cuban method "Yo Si Puedo" (Yes, I Can) Venezuela came to be declared a territory free of illiterate people in 2005 by UNESCO.

According to data from the UNESCO Statistics Institute, Venezuela is the world’s fifth country with the biggest university student registration rate (83 percent). The goal is to achieve social, cultural, educational, environmental and institutional growth, and with this, the development of the country.

The governments of both Bolivia and Venezuela are committed to struggle against exclusion and achieve the principle of quality education for all, to guarantee a level of learning responding to the needs of their respective populations.

The hard road toward a quality education has its ups and downs in South America, but social pressure, and the support by governments in the area, are undoubtedly looking to forge new directions. (Prensa Latina)